The Division 2 solo build is an important part of the game as it is usable even when playing solo. Any build can be used during solo gameplay but the risks are quite high. A good solo build not only has high survivability but decent damage as well. Tanks build have the highest survivability but their damage is quite low. There are ways to make a build with high survivability and decent damage. The build will have a tier 6 shield, 1.7 million armor, and your critical hit can be 550000k or even more. The build can help you survive even the most intense situations thanks to its talents. It has high armor regeneration with a chance of a second comeback. Shield DPS build is perfect The Division 2 solo build and makes the game more fun for players who prefer DPS builds.

Pieces You Would Need 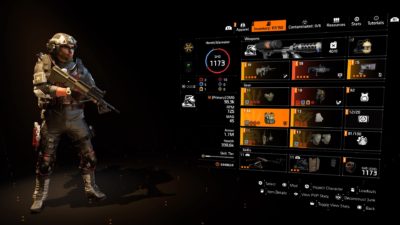 Memento is an exotic backpack with 1 red core, 1 blue core, and 1 yellow core. Equipping it would give 2 tiers to your shield giving you a chance to equip an additional damage core. The perks of this backpack don’t stop there. The Kill Confirmed talent on the Memento backpack not only gives you survivability but skill efficiency and weapon damage as well. Memento backpack is the most important part of The Division 2 solo build

Since you will be using a Memento backpack, your shield will be Tier 6 if you use Badger Tuff and Belstone Armory pieces. Using Grupo Sombra S.A. would give you 15% critical hit damage. The Grupo Sombra S.A. piece would increase your overall DPS.

With The Division 2 solo build, you will be close to the enemies. There are no better weapons for close-range than SMGs and Shotguns. These types of weapons can do insane damage at close range. Since you can only equip one exotic weapon at a time you can equip Scorpio or Lady Death or Chatter Box. Make Sure to use the SMG that can be equipped with critical damage under the barrel. The exclusive tactical short grip attachment of Firewall specialization has 10% critical damage which is more than any other attachment. 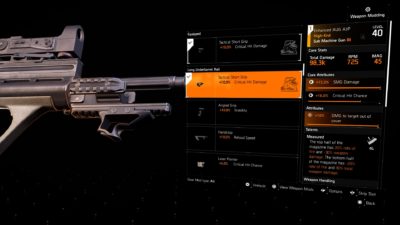 You should use Unbreakable talent on your chest piece. The backpack is Memento which comes with kill confirm talent.

Zero F’s is a named Badger Tuff chest piece that comes with Perfectly Unbreakable. A normal Unbreakable give you 95% of your armor back if it breaks. The cooldown for it is 60 seconds. Zero F’s will give 100%of your armor back when it breaks and the cooldown is 55 seconds. If you have Zero F’s then use that instead of another chest piece with Unbreakable. Using Unbreakable talent would give more survivability to The Division 2 solo build since it doesn’t have a Reviver hive.

Memento has Kill Confirmed talent which will make you an unstoppable beast. When you kill an enemy they drop a trophy. Picking up a trophy will increase 5% of your weapon damage for each red core, 5% Skill Efficiency for each yellow core, and it will give you 10% bonus armor for each blue core for 10 seconds. Since you will be using 5 blue core, 1 yellow core, and 2 red cores. Your bonus armor will be 50% for each trophy. You will also be getting 10% weapon damage and 5% skill efficiency for each trophy.

The immediate buff only lasts for 10 seconds but there is also a long-term buff. Each trophy you collect gives you 1% weapon damage, 1% skill efficiency, and 0.1% armor regeneration. The max stacks for long-term buffs are 30 and it lasts for 300 seconds (5 minutes). It means that your shield will become more tanker and the Defender Drone will become more efficient. Your skill haste for both Shield and Defender Drone will increase.

At max stacks, your armor regeneration would be 4% due to the use of Belstone Armory. Even picking a single trophy would refresh all the buffs so the buffs can practically last as long as you are alive. Even if you are downed, you still won’t lose buff unless you die. It’s The Division 2 solo build so you will be avoiding death as much as possible since there won’t anyone to revive you. 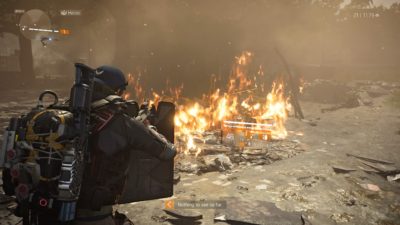 Your weapon damage will increase by 3% for every 10% ammo missing from the magazine of your weapon. This talent works well with all types of weapons but works better with weapons having low magazine size. Shotguns have low magazine size, making it easier to reach maximum damage quickly.

Firewall specialization would also set enemies in 5 meters of you on fire if your armor breaks. This works in perfect conjunction with Unbreakable talent. Even if your armor break you won’t die but enemies near you will be set on fire. It will give you a chance to get away from enemies. Your armor kits will restore 200% health over 10 seconds. Allies will do 10% more damage to enemies that are within 10 meters of you. You will have 20% extra burn duration and you will get 30% health on kill. Firewall specialization would give you cluster grenades. Cluster grandees are the best in the game due to their high damage and coverage area. 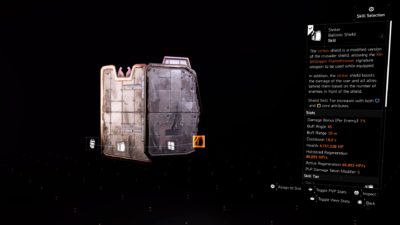 The moment your shield breaks you can deploy the Defender Drone and it will decrease the amount of damage you receive. The Memento bag pack would help your skill perform better.

How to Make The Division 2 Solo Build?

Use Memento as your bag pack. Use Belstone Armory or Badger Tuff on your chest piece with unbreakable. You can use Zero F’s as your chest piece if you have one. Recalibrate all sub-attributes to critical hit damage and critical hit chance to maximize the damage. The Division 2 solo build will not only help you survive while playing solo but also give you the ability to do more weapon damage.