Ghost of Tsushima has gotten an upgrade with the addition of new content making you wonder Is Ghost of Tsushima Director’s Cut worth it? It is still the same game but there are some major additions to the game. Director’s Cut offers extra content along with the base game. It expands on the concept and story of the base game to provide a better experience. There are some new additions to the game other than the Iki Island expansion. New activities have been added to the game that expands on the ideas of the base game.

Players would get to see the life of Jin Sakai in more depth. It explores the topics that were only briefly mentioned in the base game. Iki island map is smaller than the Tsushima Island but it is still as beautiful. The map has the same vibrant color while still being different than that of the base game. Some new moves and armor sets have also been added to the game. There are also some quality of life changes and the game has now been optimized for the PlayStation 5. It acts as an added experience to the base game making you wonder Is Ghost of Tsushima Director’s Cut worth it? Let’s find out.

Iki Island expansion takes place while the invasion of Tsushima is still on the way. So it takes place along with the events of the base game which creates an interesting scenario. Players can start the expansion as soon as the first act of the base game is over. The Eagle tribe which is part of the Mongol army has taken over Iki Island. The tribe is led by a woman called Eagle and she uses a new type of poison on the people of the island. This poison can drive people insane and makes them lose their ability to think rationally.

Jin wants to stop the Eagle tribe on the Iki Island as it could be problematic if they reach Tsushima. Jin travels to Iki Island to stop the tribe there before they could reach Tsushima. The expansion sheds more light on Jin’s past. It expands the topics that were only briefly touched on in the main story. There is more depth to the character of Jin as he deals with his inner demons. The guilt he feels over the death of his father is one of the major parts of his character.

Jin has a history with Iki Island and it is not a new place for him. It was a lawless Island making it different than Tsushima. His father died on the Island while he was trying to bring law and order to the island. The people of Iki Island are not fond of Samurais because they forcefully implemented their ways on them. This leads to a complicated relationship between the inhabitants of the island and Jin. He is forced to become an ally with the people who could have been his enemies under different circumstances. Is Ghost of Tsushima Director’s Cut worth it? There is more.

The Iki Island retains the identity of the main game with its vibrant color while still being different. There is a clear distinction between Tsushima and Iki Island. It is still as colorful and vibrant with major differences. It is a good and beautiful open world that is 3rd of Tsushima’s size. The map is still vibrant and colorful just like that of the base game.

There are different biomes on the map which include villages overgrown by foliage, beaches with white shinny cliffs, forests of cherry blossom, and so on. The biomes of Iki Island are different than that of Tsushima which is one of the clear differences. Iki Island is less civilized and there are fewer settlements on the map. There is more lawlessness, you can see that as you travel on the Island. It still has that unique Ghost of Tsushima identity of amazing colors. 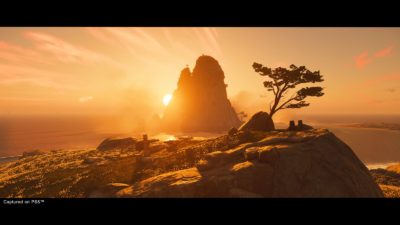 There are not a lot of combat changes and it’s pretty much the same. However, there are some new moves at your disposal. You can now charge enemies while on horseback and runs them through. Charging enemies on horseback can cost resolve. Doing so can be put you at a disadvantage if you need resolve later on and have not gained it again yet. During chain assassination, you can now throw Kenai which was not the case in the original game.

There is a new type of enemy in the game called Shaman. Shaman is not an offensive enemy but rather acts as a supporting enemy. As long as Shaman is chanting, all the enemies listening to him will get a boost. They become more aggressive and difficult to deal with. So taking down Shaman first is the best course of action. Enemies now carry multiple weapons and you have to change stance depending on the weapon enemy is using. The combat makes Is Ghost of Tsushima Director’s Cut worth it? let’s decide after reading the verdict.

There are story missions and then there are side activities. Activities are similar to base but there are some new ones as well. Bamboo cutting, mythic quests, Hiku spots, Shinto Shrine challenges, etc. are still pretty much the same. New activities involve a dueling arena in the raiders’ settlement, finding animal sanctuary, archery challenges, and new mythic quests. Completing mythic quests can unlock new armor just like the base game.

Aside from such generic activities, there are also side quests. Each of these side quests is unique just like the main game. These side quests are related to the main plot in some interesting ways which makes them even better than the ones on the base game. So there is a lot more to the game than just the main story.

Aside from all the new content, there are new charms, headband, scabbards and armor pieces which brings more verity to the game. You can now hide the quiver and bow from the menu so they won’t constantly stay on your back. Some of the issues from the old game are still there. Is Ghost of Tsushima Director’s Cut worth it, for what you know so far about it? there is more to the game.

Ghost of Tsushima Director’s Cut is a good addition that brings a lot to the already amazing game. There is a decent amount of content and it can take 7 to 10 hours to complete. If you are a completionist then it can take up to 20 hours or more depending on how you play. The map is still as interesting and beautiful as Tsushima while still being different

There is also some deep storytelling which has become a staple of PlayStation Exclusives. You see the guilt of Jin over his father’s death and how the sins of the father are the burden of the kin. So it touches on philosophical concepts as well. The Iki island expansion might not have a direct impact on the sequel but we will see what happens when the sequel comes out.

Now let’s answer the question “Is Ghost of Tsushima Director’s Cut Worth it?” If you are a fan of the base game and are craving for some more Samurai action then The Director’s Cut is a must. It adds more to the base game making it a better experience overall. Iki Island not only brings new content to the game but also explores Jin’s character even further. The pricing of the game is not decent which could have been better but despite that, it is a good package.

Support Us By Buying Ghost of Tsushima from Our Affiliate Links