Psychonauts 2 is the continuation of a series that has a cult following which makes you wonder, Is Psychonauts 2 worth it? The game is still the same and retains all the qualities that made the original so good. It modernizes the game while retaining all the things that made the original so good. So it has the essence of the original game while still being better at the same time. From the amazing characters to the amazing mental worlds, every aspect of it is still as good. If you have played the original game, then the moment you get into the game, the feeling of nostalgia will hit you. It has some weird and strange-looking place that makes it all the more likable.

Character design and their representation is also good.  Different characters have different personalities which makes them more memorable. The story is a high stake and personal which makes the characters more important. It is still very much an action-adventure platforming game where players have superpowers.  It has the vibe of the 2005’s Psychonauts while still offering a lot of new things. The humor and the gameplay loop are interesting. The artistic style of the game makes it even more interesting. All this makes you wonder, is Psychonauts 2 worth it? Let’s find out in detail.

You play as Raz from the original game working as a psychic in a secret agency that has powerful psychics as agents. This agency is known as Psychonauts and they are using their power to save the world by doing everything they can. They get into people’s heads, fight bad guys and do different kinds of things to keep the world safe. Raz was a trainee in the first game and he is an intern in the new game. He was hoping to be turned into an agent but instead, he got turned into an intern.

Raz is doing everything he can to stop bad guys and to become an agent which can lead to some pretty interesting scenarios. The opening of the game is good and even the first level of the game is good. The opening sequence is good which excites you for the experience ahead. There are some new faces along with the familiar ones. The circus family of Raz is there and they are important characters. Is Psychonauts 2 worth it to you for its premise? Well, there is more to it.

The story is both high stake and personal making it better. There are some new interns, new characters, and old ones are returning as well. Each of them is unique and has a set of persona that makes them different. Characters are well written and different group of character makes the game seem livelier.  There is humor in the game and new teams that work alongside Raz or against him. So the game gives you a lot of incentive to keep playing.

There will be a recap that will show you everything that has happened until Psychonauts 2. This will get players on board for the adventure ahead. There was a VR game that covers the events between Psychonauts and Psychonauts 2. Playing the original can be good because it will refresh your memory. However, it’s not necessary since recap does a decent enough job.

The art design of the game’s levels is amazing which makes up for a wonderful experience. Places are weird and strange that can be surprising. There are a lot of easter eggs and topics that shed light on the story of the characters. Areas are good and unique from the hub to the outside. The diversity of areas keeps the setting fresh and provide new gameplay opportunity. Areas will have gameplay mechanics that would be unique to them which makes every area a refreshing experience. Is Psychonauts 2 worth it for its setting? Let’s discuss some more.

Raz can get inside the mind of different enemies like other psychics which leads to some interesting settings. There are diverse themes and gameplay in the minds of different people. One moment you will be in one location and the next, you will be in another. This constant change of environment makes everything seem new which keeps the experience fresh. There are side activities as well which add much more to the game making it even better.

The pace of the game is good and it excites you to know about what is happening next. There are different types of levels and the good art design of these levels makes you excited for the levels ahead. You would want to know how the next level will look like which keeps you going. Levels are also tied to the story which makes their existence more meaningful. It also sets the precedence for the discussion of the topic from the first game. 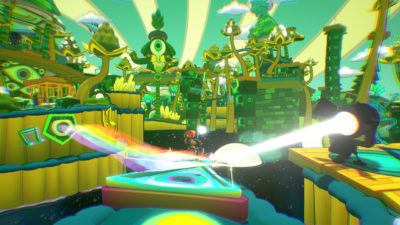 Combat is one of the best aspects of the game. There are psychic melee attack, telekinesis grab that lets you throw things at enemies, the mental connection that grabs enemies towards you, and so on. So there are a wide variety of moves at your disposal. It is not as good as Ratchet & Clank: Rift Apart but it does its job. These abilities can be used in both combat and in general gameplay. So they are not just for combat alone.

You will go against flying enemies, enemies that will charge you head-on,  enemies that have to be dodged. Certain enemies will unleash panic attacks that are fast and such enemies need to be slowed first before they can be taken down. So you have to keep on changing strategies to fight these different types of enemies. You can use all the different powers to jump, glide, and other such moves to take down the enemies.

Eight psychic abilities can be unlocked but you can only equip four of them at a time. This can be a problem since you would constantly need to change your ability. A better menu that can make equipping abilities more convenient would make it better. All the abilities are good and you will not have all of them by the end if you don’t explore. One of the good aspects of Sony’s first-party games such as Ghost of Tsushima is that you get all the abilities by the time you reach the end even with mediocre exploration. Is Psychonauts 2 worth it for its combat? There is still more to it. 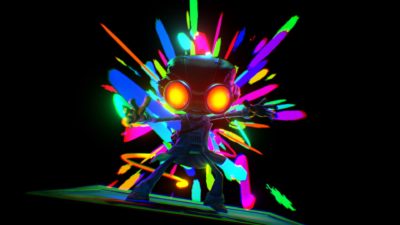 Psychonauts 2 is not a combat-oriented game but its combat is decent enough. Combat can be clucky at times and controls might not feel as responsive as other games. It is better and can get the job done most of the time. There are some amazing combat sequences and boss battles that can make the combat intense. Jumping around and fighting different types of enemies also feel good. There is not too much enemy verity but the amount of enemies it has is good enough for the type of game it is.

There are some major customization options in the game. You can always go back to the hub area to cash on all things that you have. The more you level up the more intern points are available to use. Using intern credits, you can upgrade your psychic abilities. It will make melee stronger, increase the radius of pyrokinesis. It also helps in increasing damage of different abilities such as mental pull and so on.

You can also buy consumables, health items, and items to rank up more using Psitanium which is an in-game currency. There is also the option of buying pins that grant extra bonuses. A lot of the things in the game are explained in a big journal including customization which can be helpful. In the end, it’s all about making Raz more powerful and effective as you play the game. Is Psychonauts 2 worth it to you for all that you know so far? General gameplay is remaining.

The game has good voice acting and it complements the character making them feel better. There are lots of cut scenes and some of the moments in cut scenes are quite memorable. It still plays like a game from the 2000s with some upgrades and modern mechanics. Psychonauts 2 is a new game that still has the vibe of the original but it does not go crazy with all modern stuff. It makes the game that feels nostalgic and new at the same time.

Characters look good, they have good texture, color, and art style making them a lot better. There is no limitation due to the advancement of technology, unlike the original game which helps developers make it a lot better. It has the colors, and texture of a modern game while still having the art style similar yet better than the original one. Music is also good that complements the things happening on the screen. Music will change depending on the cinematics and action on the screen. In intense combat or boss battles, it can get strong. During platforming and general gameplay, it is mostly slow music.

In between missions you can roam in the hub area which is the HQ of Psychonauts agency. Exploring finding more stuff and learning more about the world of the game is also feels good. Exploration is rewarding since there is a lot of collection in the game. There are too many collectibles in the game which can help you in leveling up as well. If you are not that much into collectibles or are a completionist that wants to have everything, then it can be a problem. You might just quit it in the mid or just complete it as soon as possible. This can be a bummer since exploration in the game feels good.

Certain areas will be locked so you can revisit areas once you have the required abilities to get to them. It is similar to how it works on other games. There are weird levels and level mechanics which are good but they can get in the way of fun. It does not go crazy with exploration but it has enough to keep the fun alive. As mentioned earlier, you can use abilities in general gameplay as well. Abilities will help you in solving puzzles and getting around in the game. Abilities play a major role in different aspects of the game not just combat. Is Psychonauts 2 worth it for exploration and general gameplay? Let’s conclude.

The original Psychonauts was released in 2005 and now we have a Psychonauts 2 (There was a VR Psychonauts as well) Fans have been waiting for it for a long time. It has a wonderful and weird story that keeps the game fresh. Psychonauts 2 expand the universe even further while still have the same essence. The game can feel clucky at times but it still feels good. It has the nostalgic feeling of the original while still being a modern game.

There are some good characters moments in the game so it is not all about goofy stuff. It is good for both fans of the original and newcomers. It has a nostalgic feeling but it does not go crazy with that feeling. Psychonauts 2 sets in perfect balance between being a nostalgic and modern game at the same time. It is an action-adventure platforming game with superpowers. The humor and gameplay loop feels pretty good making it an amazing experience.

Buy games from our affiliate links