Chameleon is an assault rifle with one of the highest RPM, The Division 2 Chameleon build capitalizes on its attributes and talent making it an amazing combination. It is one of the three highest RPM assault rifles which enables it to do massive damage in a short time. It is one of the few weapons that enable you to reach the critical hit chance cap with minimum use of this attribute. The Division 2 Chameleon Build considers everything that the weapon is bringing to the table. It uses talents, gear pieces, and attributes to make the most out of it. Every piece of the Striker build is there to max out the efficiency of the build and make it as good as possible.

You would need 4 pieces of Striker’s Battlegear. Using it would give you Weapon Handling, Rate of Fire, and Striker’s Gamble Talent. The talent and attributes of the gear set will have a massive impact on the DPS of The Division 2 Chameleon Build. Your chest piece can be Ceska Vyroba s.r.o. or Grupo Sombra S.A. or Walker, Harris & Co. Your backpack has to be Memento because the three cores on the exotic piece are important for the build. 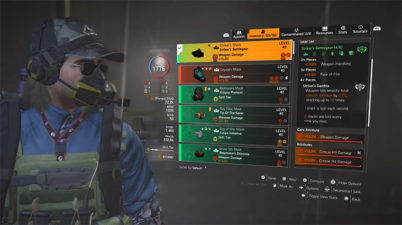 Walker, Harris & Co. is also an option since it can give you 5% weapon damage or you can use Fenris Group AB since it has 10% Assault Rifle Damage. However, using Fenris would not give a buff to other types of weapons on the Striker build. Walker, Harris & Co. is a better option since it will increase the damage of every type of weapon on the build including the Signature Weapon.

Memento is an exotic bag pack it has an Armor core, Weapon Damage Core, and Skill Core. Using Memento will give 2 skill tiers to the shield since it gets tiers from both yellow and blue core. If you want to make The Division 2 Chameleon build more tanky then a Memento backpack is a must. All you would need to max out your shield tier would be 3 blue cores, a skill tier from Technician Specialization, and a Memento backpack. 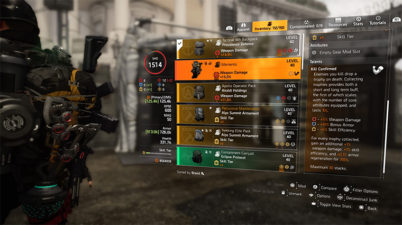 There are three talents on the build Striker’s Gamble, Obliterate, and Kill Confirmed. Talents are the main source of damage for The Division 2 Chameleon build not the attributes.

Memento is an exotic bag pack that has kill confirmed talent. When you kill enemies they will drop a trophy. Picking the trophy will grant you 5% weapon damage for each red core, 10% bonus armor for each blue core, and 5% skill efficacy for each skill core for 10 seconds.

Kill Confirmed talent will also increase your weapon damage, skill efficiency by 30% and give you up to 3% armor regen for 5 minutes. You have to kill 30 enemies to reach the max stacks. Picking even a single trophy will refresh the buff. You can keep the long-term buff throughout the game as long as you pick a trophy in the 5 minutes while the buff is active. There is a bug in the game so you might need to pick more than one trophy in 5 minutes to keep the buff active.

It is the talent that you get by using 4 pieces of Striker’s Battlegear. When you hit an enemy then it will amplify weapon damage by 0.5% for each hit. It can stack up to 50 times so your weapon damage will amplify by 25% at max stack. You will lose one stack each second and 2 stacks every time you miss the hit. Since you will be close to the enemies most of the time the chances of missing shots are not that high.

Obliterate is a talent that will work hand in hand with Striker’s Gamble talent to increase the damage. Landing critical hits on enemies will increase weapon damage by 1% and it stacks up to 25 times. So at max stacks, you will have 25% weapon damage. It lasts for 5 seconds and landing even a single critical hit will refresh the talent.

You will be at max stack by the time the magazine is empty. Since you will be close to enemies, you will have max stacks for the second magazine. Obliterate is additive damage so it is exactly 25% and is not as powerful as Striker’s Gamble. However, you won’t lose any shots upon missing hits which keep The Division 2 Chameleon build balanced. 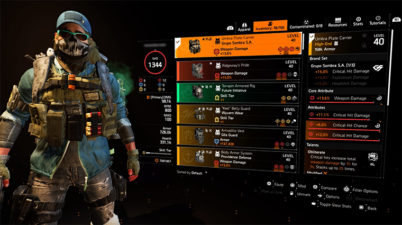 You have to use the Crusader Shield as one of the skills. Your second skill should be Artificer Hive because it will heal your shield. The Memento will increase the Efficiency of your shield and Artificer Hive as well.

The Crusader Shield will help you get close to enemies so, the chances of missing shots are minimum when you are shooting enemies. We don’t want to miss any shots because missing shots would mean losing stacks. The skill tier from Technician specialization will give one skill tier to the shield. Memento will give you two shield tiers from its skill and armor core. So you will have three shield tiers from a gear piece and specialization alone.

Artificer Hive will increase the efficiency of your shield to a great degree. The hive will also get buff from 10% healing skill of the Technician Specialization. Artificer Hive will refresh a specific amount of your shield’s health after every few seconds. The amount of healing does depend on the skill tier. So you don’t have to worry about the health of the shield that much on The Division 2 Chameleon build.

The main source of damage on Striker build is Chameleon since every part of it supports it to maximize the damage. You will have 1035 RPM with The Division 2 Chameleon build. Your secondary weapon should be an SMG since SMGs are the only weapons that can keep up with the low critical hit chance of the build. 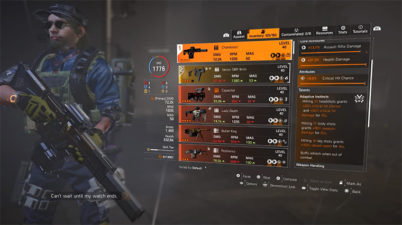 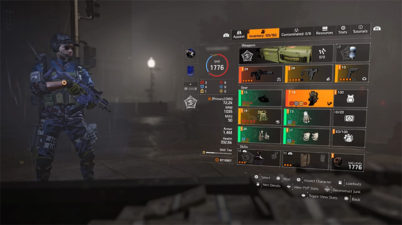 How to Make The Division 2 Chameleon Build?