Solar is one of the four subclasses, making Destiny 2 Solar Warlock build seems like a legit option. A lot of different builds can be made using the solar subclass. However, making a Solar build that not only gives you high ability regen but healing is only possible with Attunement of Grace. The build will help you clear Grand Master with ease. It will not only keep your allies alive but increase their damage while also enabling you to gain ability energy. The build is all about supporting your allies and making enemies weaker. It will help you take down unstoppable enemies pretty quickly. Swap a couple of mods and, you can use it for any activity you want. Destiny 2 solar warlock build is a support build that will keep everyone alive while also letting you do an insane amount of damage.

Pieces Need For the Support Build 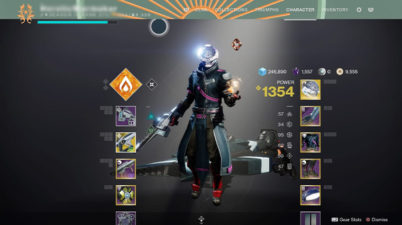 Solar is the sub-class of the build since it is Destiny 2 Solar Warlock build that utilizes all that Attunement of Grace offers. It is primarily a support build and, the attack is its secondary purpose. The build will not only heal all friendlies but increase their damage as well. So, even if you have low discipline, melee, and intellect, you will still get ability energy.

As long as you are healing allies or, empowering them, you will get Benevolent Dawn. Healing or empowering your allies will activate Benevolent Dawn which will, in turn, increase your ability regeneration. Benevolent Dawn is the main reason that you need to use Attunement of Grace with it. Attunement of Grace will also enable you to change your grenade into a blessing that will heal both you and your allies upon picking it up. Keep using rift to heal allies and, you can get ability energy enabling you to use super constantly. 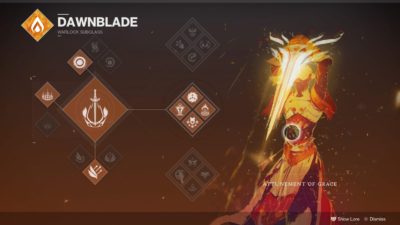 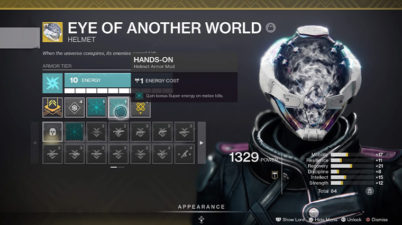 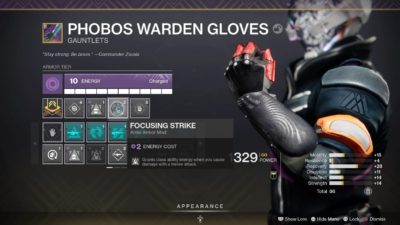 Note: To fight champions, you would need to remove these mods (Night Fall) and use champion mods

You can use any energy on the chest piece depending on the preference. Chest Armor energy type will only change energy resistance and combat-style mods. I will get to combat-style mods later but, using universal mod on that socket will not force you to use a specific type of energy. 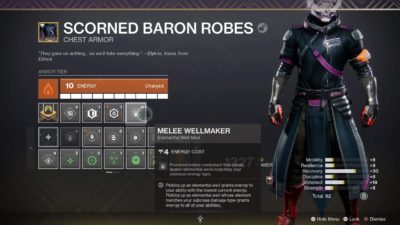 There is no specific energy requirement for boots but using Void will enable you to use mods for class ability. Insulation mod will grant you class ability energy every time you pick an orb of power. It is a Void energy exclusive mod so you would need void energy on boots to use it. The second mod on boots is Absolution and, it will give energy to all abilities. Absolution is a universal mod so you do not need a specific energy type to use it on the boots. 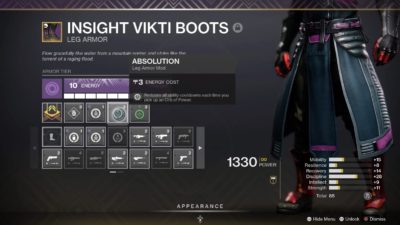 Most of the Solar damage that you do to champions will come from Withering Heat mod. Withering Heat will increase the damage to do to the champions when you hit them with a solar ability. So stunning champions and then throwing a grenade at them will do a large amount of damage to them. Use Distribution mod if you are not facing any champions in an activity. 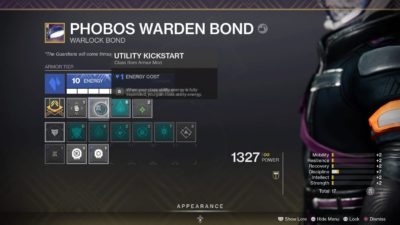 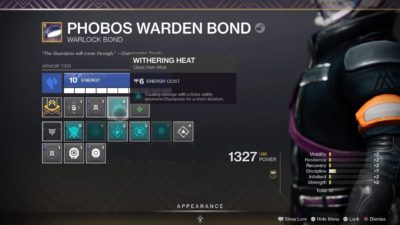 To make the most of the Destiny 2 Solar Warlock build, use Elemental Well mods and charge with light mods. High-Energy Fire mod will turn these stacks into high damage that will help you do more damage. All these mods are universal, you can use them in any piece of the build.

Elemental Ordinance mod will let you make an Elemental Well every time you kill someone with grenades. Since you will be using a lot of Fusion Grenades, you will kill many enemies with grenades while using Destiny 2 Solar Warlock build. Every time you pick up these wells, you will gain ability energy. These wells will match your subclass so they will help you regain every ability energy. 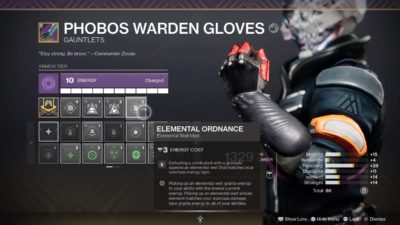 Taking charge will let you become charged with light every time you pick up an orb of power.

You can also use Melee Well Maker mod if you are doing quests that don’t have a champion. Withering Heat uses 6 energy so, not using it will free up two more energy stacks.

These mods will increase your chances of getting charged with light, letting you use it more often. 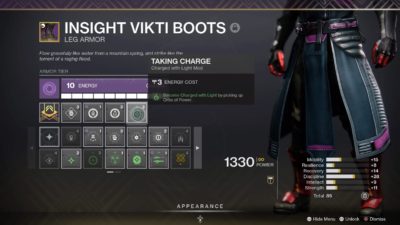 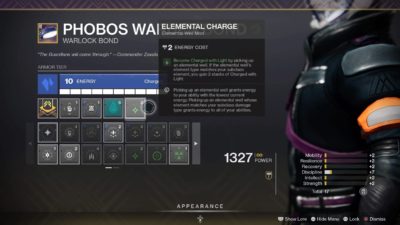 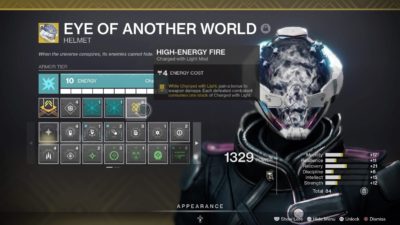 To make the support build, you would need one of the exotic pieces mentioned above. After that, use all the mods in the mod description section. Try to get at least tier 9 regeneration, tier 4 intellect, tier 5 discipline, and other stats per your choice. Heal your allies as much as possible to get ability energy and keep them alive in combat. If you are out of Rift, turn the grenade into a blessing to heal. With Well of Radiance Super, you and your allies can stand your ground even in intense combat. Destiny 2 Solar Warlock Build will let you and your allies annihilate enemies.

Support Play Ludos By Buying from Our Affiliate Links