A good The Division 2 Damage Build should have the ability to rain damage on enemies from multiple sources. It should have protection, weapon damage, and crowd control abilities to take down the enemies. What if you could make a build that can damage multiple enemies at the same time? This build will have the ability to damage up to 3 enemies at the same time. The damage will be coming from multiple sources. It will have weapon damage, debuff damage, and protection while still have the ability to crowd control with an insane amount of damage. The build that can allow you to do all this is The Negotiator Pestilence build. With weapon damage and debuff damage, you can destroy your foes.

To make The Negotiator Pestilence build, you would need 4 pieces of Negotiator Dilemma. A Memento Exotic backpack, 1 Piece of Grupo Sombra S.A. or Ceska Vyroba s.r.o. depending on whether you need critical hit damage or critical hit chance. You can also ditch Memento to use Grupo Sombra S.A., Ceska Vyrobo s.r.o., or Walker, Harris & Co. All these pieces would work in synergy to increase the damage output of The Division 2 damage build. 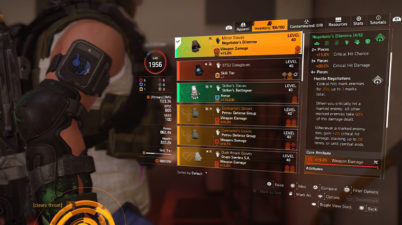 Memento is the most versatile gear piece in the game. It can give you skill efficiency, protection, and weapon damage. You can use Memento with any type of build including damage build can be a good choice. It can work with all types of builds and The Division 2 damage build is no exception. Memento has one armor core, one weapon damage core, and one skill core. It will give you 1 skill tier while also giving you a red core and a blue core. The talent on the backpack is Kill Confirmed which can give you both weapon damage and skill efficiency.

You can use any one of the three pieces depending on whether you want critical hit damage or critical hit chance. Using Grupo Sombra S.A. will get you 15% critical hit damage. Using Ceska Vyroba s.r.o will get you a 10% critical hit chance. If you don’t want to use Memento then you can use Grupo Sombra S.A. with Ceska Vyroba s.r.o. or Walker, Harris & Co. If you are maxed out on critical hit chance then use Walker, Harris & Co. Since 60% is the cap. Using any two pieces instead of Memento would enable you to keep the damage consistent from the start as you don’t have to build stacks like Memento. Keep in mind the build mostly focus on weapon damage and crowd control is just a cherry on top. 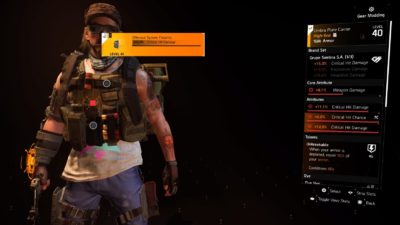 There are three talents on The Division 2 damage build. All the talents on The Negotiator build are there to make the build as good as possible. Talents on this build include Hostile Negotiations, Unbreakable, Overwatch or Obliterate on chest, Kill Confirmed, or Vigilance on the backpack. Depending on your preference and playstyle you can use any of the five talents.

Critical hits will mark enemies for 20 seconds Up to three enemies can be marked with critical hits. When you hit a marked enemy then all the other marked enemies will get 60% of that damage. Enemies will only take 60% of the damage of every critical hit. So any other type of damage would not pass on to other enemies. Pestilence will help you in crowd control and keep the damage persistent.

Additionally, you will also get another buff when you engage in combat. Whenever a marked enemy dies then it will increase your critical hit damage by 2%. It can stack up to 20 times so at max stacks you will have 40% extra critical hit damage. The stacks will last as long as you stay in combat.

If you want more survivability then Unbreakable performs way better. Since you won’t have a reviver hive, Unbreakable will act as a reviver hive and give you a second chance. It will repair 95% of your armor when it breaks. The cooldown for the talent is 60 seconds. It means that after every 60 seconds you will have a second chance. However, using it won’t give you any damage so if you want to increase the damage output then use the next two talents.

When you stay in cover for 10 seconds then you will get 12% weapon and skill damage (8 seconds for Perfect Overwatch Found on name Fenris Group AB chest piece called Ferocious Claim) The buff will remain active as long as you stay in cover or if you move from cover to cover. Overwatch offers additive damage so keep that in mind.

Vigilance is a talent on the backpack that increases the weapon damage by 25%. Taking damage disable the talent for 4 seconds (3 seconds for Perfect Vigilance). 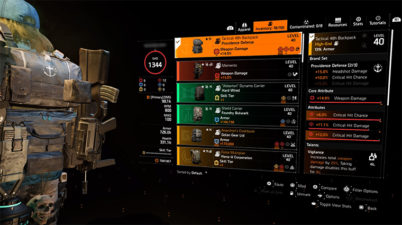 It is a talent on Memento exotic backpack. Killing enemies will drop trophies, collecting a trophy of each kill grant player 1% weapon damage, 0.1% armor regen, and 1% skill efficiency. This can stack up to 30 times. At max stack, it will increase weapon damage up to 30%. Additionally, it can give you up to 3% armor regen and 30% skill efficiency at max stack. There is also a short-term buff but it is not that important for The Division 2 damage build.

Gunner specialization is important for The Negotiator Pestilence build. Using it will give you weapon handling, 10% armor on kill, 15% increase in RPM upon kill among other things. Hostile Negotiations will amplify all these aspects since you will be taking down lots of enemies. The 10% armor on kill is not much but when it combines with Hostile Negotiations, it can make a lot of difference. Gunner specialization will also give a large pouch for your LMG so you can use any other LMG with it. You can use any skills with this build as long as you are comfortable using it. However, if you are using unbreakable talent then don’t use reviver hive with The Division 2 damage build.

Assault rifles and LMG perform best with The Negotiator build. The Division 2 damage build uses multiple damage sources to take down enemies. No other weapon is better than Pestilence in doing so. With Pestilence, you can damage multiple enemies. As a secondary weapon you can use any AR but the talent on it should be any that increases your damage or survivability. 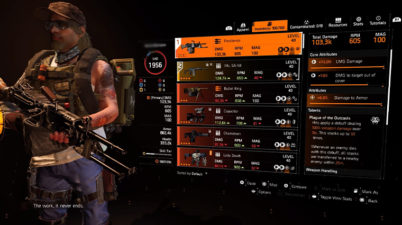 It is an exotic LMG that can damage multiple enemies at the same time. Pestilence has Plague of The Outcasts talent. Hits with weapon apply 100% weapon damage for over 10 seconds. Enemies you shoot get a debuff that can do up to 50 times the weapon damage at max stack. If an enemy dies when it is under the debuff then it will get transferred to the next nearest enemy within 25 meters.

Pestilence can work hand in hand with Hostile Negotiation talent to maximize the damage. Marked enemies will die under the effect of the debuff which will increase your critical hit damage. If you don’t have Pestilence then use any other LMG that has talent that focuses on the damage or survivability.

How To Make The Division 2 Negotiator Build? 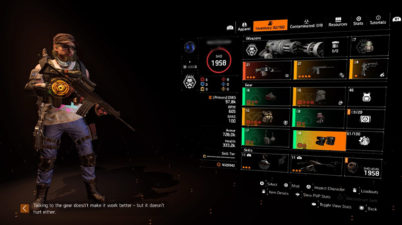